A few weeks ago, Columbia had its very own Restaurant Week. This is a glorious week each year during which multiple restaurants in the area select a 3-course limited menu for a great deal. Which means we can go to a nice place like Ristorante Divino for a fraction of what we would normally spend, were we to purchase 3 courses (times 2) a la carte. 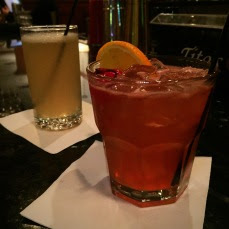 Ristorante Divino might be one of our favorite restaurants in Columbia. We’ve been twice now (the other time also during Restaurant Week a few years ago), and we’ve had a wonderful experience both times.
You gotta love a place where the food, service and atmosphere all come together perfectly. And at Ristorante Divino, they certainly do!
We didn’t have a reservation (which is pretty risky on a Saturday night in The Vista, let alone during Restaurant Week), but we don’t mind sitting at the bar, so we decided to take our chances. As it turned out, the bar table quickly came available, and we swooped in to have pretty much the best seat in the house!
We started with handmade cocktails that were fabulous. I had something with blackberries in it that I keep trying (somewhat unsuccessfully) to recreate at home. 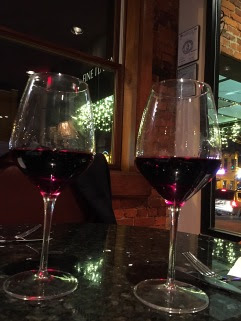 Trying to relive our time in Italy, we order some Chianti Classico to go with our dinner, and then asked for the Restaurant Week menu. (Sometimes restaurants don’t immediately hand you these unless you specifically ask for them, so keep that in mind if you were really looking forward to your 3 courses that you picked out ahead of time and for which you chose the restaurant… What? I don’t do that…)
I ordered the bruschetta appetizer, and Bri had a salad as our first course. Both were fabulous. I’d never had bruschetta the way they made it. Instead of just a plain tomato bruschetta (which wouldn’t have been in season here), they topped the crostini with some sort of delicious mascarpone cheese spread and fresh herbs, which gave it a flavorful punch. 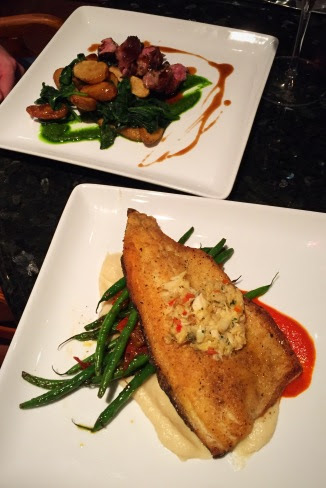 On advice from our server, I put in my dinner order early to make sure I got one of the last pieces of the fish of the day. And it was lucky for me, because that fish was AH-MAZING! Bri had some sort of beef tenderloin with fingerling potatoes, which he said was really good, as well.
The thing I really like about places like Ristorante Divino is that the chef really seems to know how to plate things well. The food is really good, but it’s more about the sauces and the sides and how they all come together on the plate that really make a dish, as opposed to just a good piece of fish or what-have-you.
But, let’s talk about dessert. Because, really, aside from the bruschetta and the fish and the wine and the cocktails…the DESSERT was the best part of the meal… 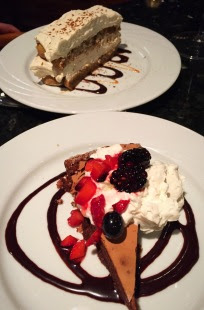 I ordered some sort of chocolate cake (duh!) topped with homemade whipped cream (ain’t no Cool Whip here!!!!!) and fresh berries. Bri had the tiramisu (which he only recently realized that he likes…). I may or may not had at least half of each, and I gotta tell you: they were both fantastic. I’d be all for sitting up at the bar and having just desserts at Ristorante Divino anytime of the year.
Ristorante Divino is a great place for a romantic night or just a special dinner out. It’s not the least expensive restaurant around, but with fresh, local ingredients and great service, it is definitely worth every penny.