My husband and I are what you might call “old souls.” While many young professionals are out on aThursday night hopping from bar to bar, Brian and I often like to head over to California Dreaming and listen to local artist Jim LeBlanc cover songs from Bob Dylan to Simon and Garfunkel, as well as a few of his own originals.
He takes requests – often from Bri – and then sings them in his own soulful voice. Brian grew up on this genre of music, and I can tell it takes him back to his childhood when his parents used to play what are now considered “classics.” 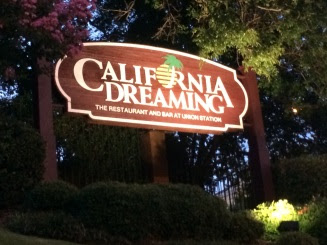 California Dreaming is unique because it’s been around for quite some time (since 1984), and is pretty much the only sit-down restaurant on Assembly Street between USC’s campus and the stadium – unless you count sitting in your car at Sonic Drive Thru.
The building used to be the old train station, so trains frequently pass right by the building, which is kind of cool and adds to the charm. 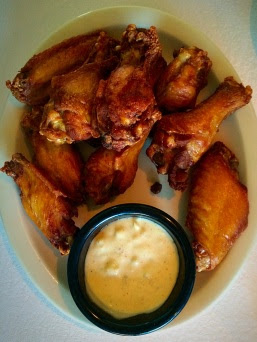 But California Dreaming has also become something of a family tradition, as well. Anytime someone in Brian’s family has a birthday, we all get together at California Dreaming to eat as many Tijuana Chicken Wings as we can handle, and to basically drink their house-made blue cheese dipping sauce with a straw.
Last night was one of those occasions. 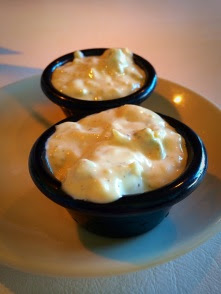 Lucky for us, Bri’s brother and his wife have birthdays just two days apart from each other, so the rest of us get to benefit by eating ALL the blue cheese.
You guys. I don’t really care for chicken wings all that much. They’re often kind of squishy and just plain messy. But these Tijuana Chicken Wings are off the chain. They are crispy and flavorful, and the chicken is roasted inside to a perfect texture.
And then you dip them in the house-made CHUNKY blue cheese dressing (I’m talking I found a 1.5 square inch chunk of straight up blue cheese in my little dish last night), and they are TO DIE FOR. 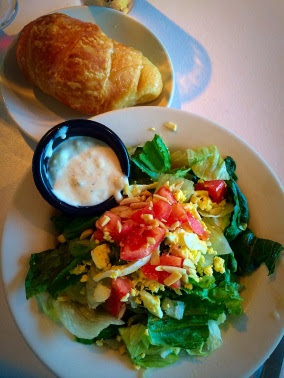 House Salad with a croissant and more blue cheese

We don’t even use the menus anymore. We order an appetizer of the chicken wings, tons of blue cheese, and then just about everyone gets a plate of chicken wings as their entree. I got a salad, too (because health). And also because more blue cheese. Oh, and the salads come with a honey-drizzled homemade croissant. Overall it was a really healthy evening…
So if you’re ever in the mood for a relaxing night of music, an ice-cold beer, and the best chicken wings and blue cheese you’ve ever had in your life, head over to California Dreaming on Thursday nights,sit at the bar, and tell ’em ColaTownTourist sent you!
Lindsay Harmon
ColaTownTourist
https://colatowntourist.wordpress.com/

Lindsay Harmon
My name is Lindsay and I love travelling, acting, reading, cooking, EATING, and exploring my hometown, Columbia, South Carolina (affectionately known by locals as "Cola Town," or sometimes even "Soda City"). I live with my wonderful husband Brian and our crazy yellow lab Cooper, alternately longing for summers at the lake and Christmas. A graduate of both Clemson and the University of South Carolina (I know, blasphemy!) my blood still runs orange, while my husband bleeds garnet. Every Thanksgiving weekend we put our marriage on the line as we watch the Big Game. When not at the lake, we spend our evenings and weekends enjoying our front porch in the quaint Rosewood neighborhood, and checking out local downtown restaurants, festivals and general goings on in Cola Town. I hope you enjoy getting to know my little city as much as I do. God bless!